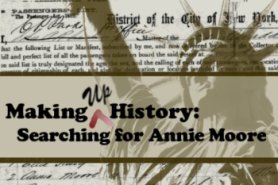 On a cold winter's day in 1892 Ellis Island opened its "golden gates." The first to enter was a young Irish girl who became a celebrated symbol of hope and freedom. In 1990 her story was resurrected... but did history get it wrong? Join in the search for the truth about Annie Moore.